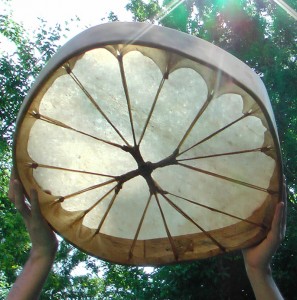 If we truly learn by our mistakes, then I must have learned a lot over the last few months whilst struggling to master the art of drum-making. There are workshops up and down the country in which you can learn the necessary skills, but, as ever, my guiding spirits led me to do it the hard way.
My initial inspiration for wanting to try came from a film I first saw many years ago called The Shamans of the Blind Country (1981, directed by Michael Oppitz - scroll down to watch it), about shamans in a remote region of Northern Nepal. A group of them set out with a young apprentice to help him make his drum, the most important tool of his trade. First, he must dream of a tree, then lead his elders to it in the physical world. Next, to ensure that he has found the right tree, he must sleep by the base of its trunk and report any dreams he has to the elders next morning. Only if they agree is the tree felled. 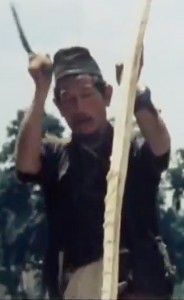 He found a tree, the dream was good, the tree was cut. The young apprentice and his companions then split it to make two rough, thick planks and set off back towards their village carrying them, stopping every now and then to reduce their thickness and smooth them down using a billhook, an adze and a machete (left). They make two in case one breaks when they try to bend it. Wise advice. 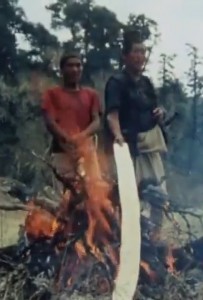 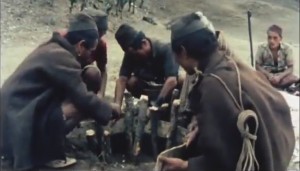 They dug a circular pit the size of the required drum and banged a circle of wooden stakes into its floor. One of the prepared planks was then held over a fire for a few moments (right), after which one end was hooked into the staked hole and the remainder bent around the stakes (left). When the two ends overlapped, the whole was tied tightly around to hold it in shape. It was then fixed with iron nuts and bolts, the local belief being that iron is a powerful, magical material.
This all looked reasonably simple. Ha! If simple is what you're after, buy ready-cut timber. If you want even simpler, you can buy ready-made drum hoops online for about £30. I decided to find a tree. Here it helps if you have friends who live in 80 acres of woodland. I am so blessed. 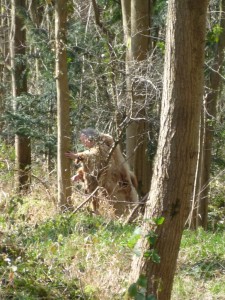 I was led to a thickly wooded bank where I found a couple of tall, straight trees that looked about the right size. However, when I placed my hands on their trunks, I got no indication from them that they were willing to work with me. I moved on and found an Ash tree that looked perfect and was located right next to a broad path. This time, when I touched the tree (right), a buzzard rose up from the trees a little way off, took to the sky and flew overhead towards the West.
Further confirmation of the rightness of this tree came when felling it. I cut a notch into the downhill side with a billhook then sawed through the trunk from the other side with a bow saw. The saw went through it with amazing ease and the tree fell perfectly down the side of the path.
I had thought of attempting to split the logs myself and pare them down to the required thickness using an adze. However, while building a roundhouse a few years ago, 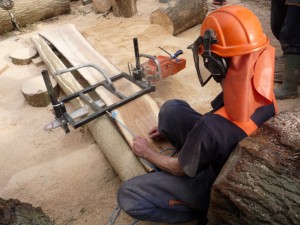 I'd tried log splitting using a billhook and mallet. It was a hopeless failure, the split twisting in all directions. I decided then to take up the kind offer of local all-round handy-man, Ben, and resident cabinet-maker, Garth, in shaping the wood. Ben has an ingenious chainsaw rig that did the initial cutting (left), while Garth's workshop (below) provided the tools and expertise to produce strips of timber 9 feet long, 3 inches wide and ¼ inch thick. The actual length needed to make an 18” diameter drum is about 5 feet, but you need an extra foot or so to give you leverage during bending and, as an absolute beginner, I wanted to err heavily on the side of caution. 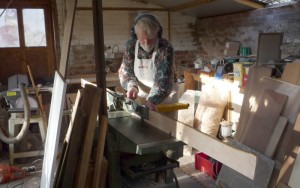 It was after the timber was sliced to size that I made my first mistake. It was beautifully flexible and I should have bent it there and then. However, it was the end of a long, hard day and mealtime beckoned. I thought the timber would be OK overnight. I was wrong. By the next morning it had lost most of its flexibility. 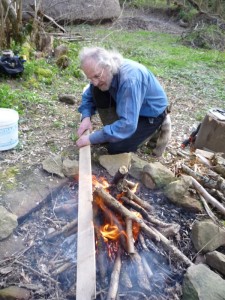 Nevertheless, I took the four cut lengths down to the roundhouse and tried the Nepalese shamans' technique of cooking it briefly over an open fire (left). I transferred it to my circle of stakes and tried bending it. It hadn't gone round much more than the first couple of stakes before it broke. OK, that wasn't going to work then.
I'd seen another film online in which a Native American drum-maker had hauled his timber out of a river and, without heating or any other treatment, had successfully bent it around an iron former. Right, let's try that then. Off to the Borle Brook, tributary to the River Severn with its inhabiting goddess-spirit, Sabrina. Roped the three remaining pieces together, weaving rope between them so that water would be able to circulate all around them, and put them into the Brook, holding them underwater using a conveniently placed tree root at one end and a rock at the other. 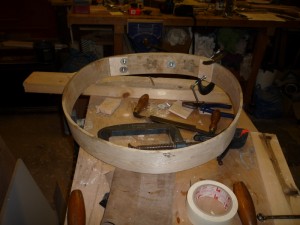 The guy in the video neglected to say how long he soaked his timber for, so I figured I'd leave mine overnight and then try it. Obviously not long enough. Another break. Left the remaining two another night, then tried again. One broke, the other, with a bit of help, held. Hooray! Well, it had one split that was caught and clamped to some of the extra length I'd cunningly left. Even so, back at the workshop, I had to resort to using bolts to hold it together as well as the rawhide thongs I'd intended to use. This held it together, though at the expense of increasing the weight. Nevertheless, I had my first useable drum hoop (above) and, in fact, given that my original inspiration had been th 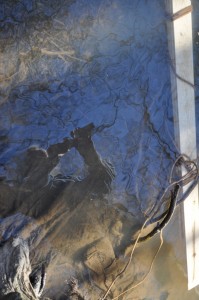 e Shamans of the Blind Country, the presence of the steel bolts was appropriate: in their part of Nepal it is traditional to add iron to every shaman's drum hoop for its magical protective properties.
I helped Garth reduced the second log to five strips of the required size. These were again roped together and placed in the caring waters of the Brook. Then I had to go home.
Tune in next time for the further adventures of a Druid drum-maker. Most of the photos are by Elaine Gregory and a couple by me, apart from the screen-shots from Shamans of the Blind Country.
Many blessings,
Greywolf /|\

Shamans of the Blind Country, Part One (be aware, this film contains images of animal sacrifice that you may find disturbing):

Shamans of the Blind Country, Part Two (be aware, this film contains images of animal sacrifice that you may find disturbing):