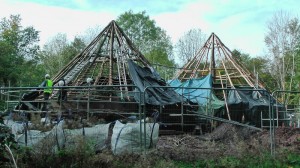 Since October 20th, I've been helping to thatch a pair of Iron Age roundhouses at the Museum of Welsh Life in St. Fagans, not far from Cardiff in South Wales. The Museum has a 100 acres of grounds, in which are buildings from many parts of Wales and many eras of Welsh history, including a church, a water mill, stone cottages and Victorian shops. The roundhouses I'm working on are based on the archaeology of a site on Angelsey, that legendary Druidic isle.

I'm sharing a cottage nearby with two friends, Ken and John, both of whom helped build my roundhouse in Shropshire. John is an expert in ancient thatching methods and taught me to thatch. Both the roundhouses we're working on are bigger than mine. One is 38 feet in diameter, the other 45. Mine's just 22 internally, 28 to the outside of the eaves. The larger of the two at St. Fagans is over 28 feet tall, ten feet taller than mine. We have just eight weeks to thatch them both. 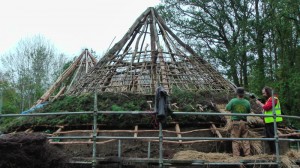 Since no one knows how Iron Age roofs were constructed, we're using a method that has historical precedent in the medieval period. Working on a base of hazel and willow wattle, we're weaving in a thick layer of gorse. Over this, we'll lay a thin coat of heather, pressing down on it to compact the gorse. Then we'll stuff straw into this base coat in a process called, appropriately, stuff-thatching. 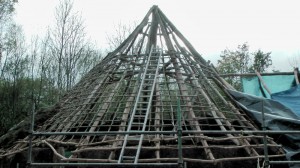 I've been meeting lots of interesting folk here. We have groups of volunteers helping out, including archaeology students and guys on probation. Then there are the archaeological consultants on the project and Ian, the resident Iron Age reenactor, who's building an 18 foot wicker man this week to be burned at Hallowe'en. It's a public event here at the Museum and you're welcome to come along. It starts at 4pm on the 31st. 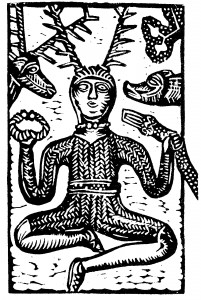 I love thatching, and roundhouses. I hope to bring some Druidry to these two when they're complete, giving talks and maybe workshops and ceremonies. I'm weaving Druidry into it as we work. A time-lapse camera is set up to photograph the site every 30 minutes. This morning it caught me invoking gods, including Arianrhod of the starry skies and Gwydion, antlered lord of forests. Appropriate, I think, to the setting of a Museum of Welsh Life.
Blessings to all, and have a wondrous Hallowe'en (or Nos Galan Gaeaf as it's called in Wales, 'Nights of Winter Calends')!
Greywolf /|\