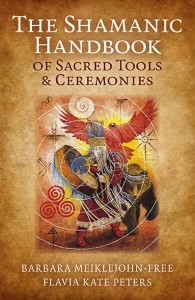 There may be those who feel the following review is a case of, as the old adage goes, “the pot calling the kettle black.” I disagree, but then I would, wouldn't I?
Knowing how much work goes into producing a book, and, as a writer myself, aware of how much bad reviews can sting, I really, seriously dislike writing negative ones. Hence I've sat on this review for several weeks, arguing with myself and others over whether to publish it or not. However, having been given the book to review by the publisher, I feel obliged to offer an opinion, and, of course, it has to be an honest one or what's the point?
The authors of The Shamanic Handbook both seem to live in England, yet refer to the “British Celtic Lands” with no acknowledgement that England, for better or worse the dominant British nation, has a culture that is predominantly Romanised, Anglo-Saxon and Anglo-Norman, not Celtic. To call these islands “British Celtic” is, therefore, to ignore the last 2,000 years of their history. Perhaps they mean the term to apply only to Scotland, Wales, the Isle of Man and perhaps Cornwall and Ireland? If so, it would be good to know that and not simply have the contentious term, 'Celtic' bandied about without explanation. Despite many references to these “Celtic lands,” most of the Old World traditions referenced in the book are either Graeco-Roman or Egyptian. This gives the impression that the writers are following in the footsteps of numerous New Age authors and simply using 'Celtic' as a popular buzz-word. On her website,

Barbara Meiklejohn-Free claims to have been born in Scotland. The book, however, has no mention of this in the short chapter on ancestors, which ends in a very non-Celtic way with the Lakota phrase, mitakuye oyasin, usually translated as “all my (or our) relations.”
The term, 'shaman' is used with equal abandon, though with a little more explanation, albeit not until page 130, when it is acknowledged that the word “most likely” originates with the Evenk people of Siberia. On the same page, the authors admit that “There have been many heated debates about using the name 'Shaman.'” They conclude that “This is an individual and personal choice, which carries a great personal responsibility, for words have power and names have meanings.” Words also make up languages, and languages are a vital component of the cultures in which they develop and are used. Personally, my choice is informed by sensitivity towards the people amongst whom spiritual traditions originated, who have guarded and transmitted them for untold generations, and who see them as vital to the survival of their cultures and peoples. Few of my friends who follow paths that might be described as shamanistic call themselves 'shamans.' Most, like me, either use terms specific to their own cultures or non-culturally-specific terms such as 'spirit worker.'
Another aspect of the book I find problematic is that Native American concepts, terminology and ceremonies feature prominently throughout it, with no attempt whatsoever to address the question of cultural appropriation. A gathering of the Lakota, Nakota and Dakota peoples more than twenty years ago declared war on non-Native New Agers who 'steal' Native American spirituality and sell it for profit, and many other Native Americans equally strongly oppose what they see as the ultimate act of theft committed against their people. Hence my unease that so much of the spiritual language in this book is couched in Native American, specifically Lakota, terms, and that several exercises given in it are derived from Lakota sacred ceremonies. We are given no indication as to why, or by what right, two British women are offering these things to us. Without such background information, this smacks of 'Wannabee Indian Syndrome.' A Native American friend, TC (short for Thundercloud), once asked me to convey a message to people in Europe. He said “Tell 'em not to put us Indians on pedestals; we're liable to fall off.” Based on the contents of this book, it seems that its authors have not got this message.
The path I was drawn to is Druidry, in large part because, so far as we can know, it originated here in Britain, where I was born, where I still live, and where my ancestors lived as far back as it is possible to trace. My ancestry combines Welsh, Scottish and Anglo-Saxon blood lines, so while my spirituality is rooted in Druidry and its antecedents, I also honour Anglo-Saxon deities. This makes sense to me, genetically and geographically. Like the authors of this book, I sometimes travel to other parts of the world. I have taken part in drum circles with Quileute and Makah folk of the Pacific Northwest. In doing so, I follow the beats and, so far as I am able, the words, of the chants and songs, but do so as a British Druid, not as a Wannabee Indian. Like the authors, I gain great inspiration from interactions with indigenous peoples, but that inspiration helps me to renew, refresh or restore long-lost parts of my own native heritage.
For example, I make drums with one of my sons. Some aspects of the process derive from videos posted online by Native American drum-makers, others were inspired by Central Asian, Norwegian, Siberian and Irish drum-making practices. I believe that frame drums of a similar type were once made in Britain, though I know of no specific evidence. Being organic and quite thin, frame drums rarely leave any archaeological trace. We use locally sourced materials. Barbara Meiklejohn-Free has drums made in the USA and imported to the UK to sell. They are mentioned many times in the book and described in detail. I'm sure they're very good drums, but the trees from which the hoops are made, and the animals whose hides form the drum-skins, lived in a land thousands of miles away, separated by the vast Atlantic Ocean. When there are many fine drum-makers here in Britain, why import drums from such a distant land? Apart from anything else, what about the carbon footprint from having them flown all that way?

The same goes for Californian Sage, also referenced repeatedly in the book, which she also imports and sells. Again, why? Clearly because it's used by Native Americans. However, we have our own British tradition of cleansing and purifying with smoke, commonly known by the Scottish term, 'saining.' We have our own native herbs that can be used for this, including Mugwort (left), St. John's Wort, Yarrow, Meadowsweet and others. None are mentioned here. Instead, the section on herbs is basically one long advert for the imported Sage bundles that Barbara sells. This seems doubly strange since she claims to have been taught “the Old Ways” by a Scottish seer from the age of twelve. Perhaps saining was not one of the old ways he introduced her to.
In curious contrast, the authors refer to “dire consequences” resulting when hallucinogenic plants, or “plant medicines” as they call them, are used away from their native geographical and cultural context. Here I am in agreement with them, but this simply makes their failure to apply the same principle to other sacred herbs and tools all the more baffling.
The sheer quantity of product placement in the book means that at times it reads more like a sales catalogue than a guide to a spiritual tradition. While I am the first to acknowledge that spirit workers have a right to be paid for what we do just as much as any other profession, I am uncomfortable with the amount of overt advertising here, where we are continually told of products available at the back of the book. Ironically, on turning to the back, there is no information about the products.
This calls attention to other technical problems with the book, including many typographical errors, the seemingly random ordering of information, and the frequent repetition of the same information in slightly different forms. I'm not sure what went wrong here, as Moon Books are usually good on proof-reading.
The book is clearly pitched at people interested in the Michael Harner, Californian school of New Age global shamanism. Although there is no shortage of advice for them, and some of it is good, it is a shame that it is wrapped up in so much that is contentious, poorly explained or entirely unexplained.
My advice to those seeking spiritual sustenance is to first look to the traditions of your own land and ancestry. If you live elsewhere in the world but your ancestors are European, look to your ancestral traditions first. For other combinations, use your common sense. Begin with those traditions with which your ancestry gives you a natural affinity. Engage with them as fully and deeply as you can, immerse yourself if them, allow them to become your key to engaging with the spirits around you. Then, when you are fully and firmly grounded in your own native tradition, you can engage on an equal footing with practitioners of other traditions wherever you go, with mutual respect and without accusations of cultural theft. 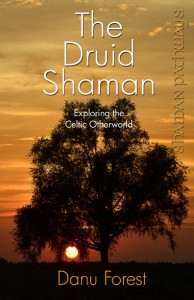 Books offering sound, practical introductions to native British traditions have been available since the early 1990s and there are many to choose from. For those seeking an overtly shamanistic approach to those traditions that is well-written, inspiring, practical, and culturally coherent, I recommend 'The Druid Shaman,' by Danu Forest (Moon Books, 2014). OK, it does have that problematic word, 'shaman,' right there in the title, but the author is aware of the problem and uses it in its broad anthropological sense as a shorthand to alert potential readers to the style of Druidry found within it. As a title, 'The Druid Shaman' is considerably less ungainly than 'a Druid way of engaging with spirits of plants and animals, land, sea, sky, gods and ancestors for the purposes of bringing about healing or divining hidden knowledge for the benefit of one's community.' I still look forward to the day when we no longer need to use 'shaman' as a shorthand because people understand Druidry as an indigenous tradition without the need to qualify it as 'shamanistic.' One day...
Greywolf (Philip Shallcrass)
October 9th, 2015

7 thoughts on “The Shamanic Handbook of Sacred Tools and Ceremonies”