Arriving at GaiaGarden in Sweden on Thursday, there was much to be done, including putting up awnings around the ceremonial area, and to cover the place where food would be served. There were also wooden benches to make for 150 people. Luckily, we had Melchior, who handles a circular saw and an electric screwdriver like Jimi Hendrix played guitar. It was awesome to see. 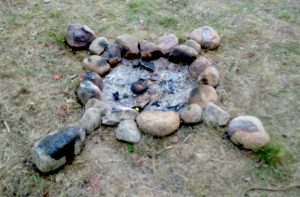 A fire-pit was made with a circle of stones around it. Morten didn’t believe the compass on my phone for marking out the directions. I wanted to believe because it showed there to be a garden gnome hiding in the bushes at the North. Next day, we came back with Morten’s mechanical compass. It disagreed with my phone, so we had a gnome in the North-East, which was fine.

Birch logs were ported across from the log store by wheelbarrow. Many trips were needed before a good pile of logs was made. A basket of kindling was gathered from the woods and all was ready for our sacred fire to be lit.

We rigged up a green tarpaulin over the stage, between timber posts at the front and a set of goalposts at the back. If musicians were not too tall, they’d be OK. Guy Bijl said “We play sitting down, we’ll be fine.” We tried a straight Birch branch to hold the tarpaulin up, but settled for rope rafters in the end, which worked pretty well. With coloured lights hung from them, the stage looked pretty good. Maybe more early 70s free festival than 21st century Glastonbury, but pretty good. 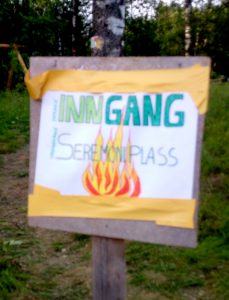 Meanwhile, Morten roped off almost everywhere with striped ribbons. A sign appeared saying Seremoniplass so that we would know the way, and all was ready.

Vehicles began to arrive, tents sprang from the ground like giant mushrooms, and the Gathering steadily grew. By the time of the opening ceremony at 6pm, we must have been about 80 strong. During the opening ceremony, the sacred fire was lit, always a nervous moment as I’ve seen a lot of matches fail to strike and lighters refuse to work over the years. Not this time though. The fire kindled quickly and burnt well.

A second fire had already been burning a few yards away, and a large pot full of chaga had been brewing on it, tended by Morten, Louise and Kyrre Franck. This meant that we could flow straight from the opening ceremony into a chaga healing ceremony, during which we sent out prayers for healing to those in need. Then there was a fifteen minute break before our Druid Midsummer ceremony.

We based our ceremony on traditional Midsummer celebrations in Cornwall, where hilltop fires survived 1500 years of Christianity, died out briefly in the 1890s, but were revived in the 1920s. Part of the tradition there is for fitter folk to take part in a Serpent Dance, linking hands and running through the streets in towns, or around the bonfires. Torches lit from the fires are then carried through the fields to bring the cleansing blessing of the sacred flames to crops and animals.

This video contains a version of the traditional ceremony. The sound quality isn't brilliant, but there's a lengthy section where the Lady of Flowers attempts to lob her garland of herbs onto the fire which is quite fun...

We’re always a little nervous before a ceremony, wondering how it’s going to go. Bringing one of our ceremonies to a shamanic gathering in Sweden, we were even more nervous. How would people react? We had no idea. All was good, because the people who came to the weekend were so wonderful, with such good humour, and willing to join wholeheartedly with all that was on offer.

Of course, we included typical pieces of Druid ritual, opening with the Call for Peace, chanting the Awen, the flowing spirit of inspiration (which may have increased the rain a little), holding hands to swear the Oath of Peace. Arthur and Kyrre helped us with calls to the quarters. We thought Arthur would be good for the North, since his name comes from Arctorus, the Bear, and the Bear is the animal we associate most with the North. Kyrre called to the spirits of Water in the West. We included Rudyard Kipling’s ‘The Tree Song,’ which has been adopted by a lot of Druids and other Pagans as a Midsummer anthem. I think we did OK?

Saturday morning began (after breakfast and coffee, of course), with the music of plants, brought to us by our wonderful host, Ingvild, and her magical plant music machine. Beautiful, gentle start to the day.

After a short break, we rowed a spirit canoe on a journey of healing for someone who had arrived the night before feeling very unwell. We were guided by Inge Lise, who did a fantastic job keeping all us crazy people focused and on track, making sure our boat didn’t run aground or sink. The healing worked.

Elaine and I helped Louise serve lunch, then it was time for the Himalayan healing ceremony, but both Elaine and I realised that we were too tired to go to it. Instead, we drifted in and out of sleep as the ceremony went on in the room above us. From what we could hear, it sounded like a powerful experience. 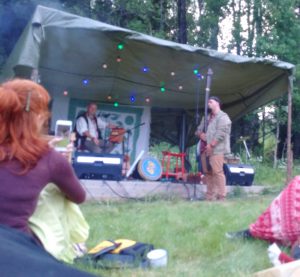 In the evening, we were treated to magical music from the Bijl Brothers and Cromlec’h, both from Belgium, both excellent. The Bijl Brothers’ Cuckoo Song was particularly memorable for the humour of the performance. Steve’s playing of an Eastern European instrument called a Faljar was also an outstanding moment for me as I’m a collector of obscure musical instruments and had never heard of a Faljar before Morten introduced me to one. It’s a sort of giant flute, played upright. It doesn’t have many finger holes, so most of the note range is achieved by regulating the breath. You’re also supposed to sort of sing into it. The resulting sound is unique and amazing. I want one!

Cromlec’h were short of a member, one of their number being so very pregnant that a long road trip to Sweden probably wasn’t a good idea. Luckily, Louise was a member of the band when she was living in Belgium, so she sat in for a few numbers on bodhran, which was good to see and hear. Their mix of traditional and self-written songs quickly won over the audience and led to an outbreak of spontaneous dancing that lasted as long as the music did.

As midnight approached and the set came to a close, the sky was still quite light, having set just below the horizon not long before, taking a brief rest before rising again a couple of hours later. Not quite a midnight sun, but as close to it as Elaine and I had been. Nights that don’t get dark were a new experience for us both.

My presentation took place at 2.30pm in the lecture room so that I could show folk some strange images of Druids through the ages. My intention was to explain my vision of Druids as the shamans of Britain, Ireland, and a good part of Europe North of the Mediterranean.

In the middle of my presentation, a strong wind whipped the curtains out through the windows and crashed the windows against the walls of the building. Sitting smiling in the front row was Kyrre, who told me earlier that he had joiked for the wind on the drive to the venue. Good joiking, my friend!

I ended, of course, with ‘my’ native British Wolf Chant. I like to give it away to groups as often as possible because I believe it has a good effect in protecting Wolves in the wild and encouraging their re-introduction in places where they have been hunted to extinction.

We then watched as people packed up to leave, trying to catch everyone for a hug before they went, feeling deeply that we had made many new friends over the weekend. Then began the task of taking down all the things we had put up a few days before.

Later, the twelve of us who were left held a feast in the dining room. There was so much joy around that table. What a weekend it had been! We ate four enormous pizzas and a giant cream cake, washed down with some lovely elderflower wine and a bottle of Louise. Yes, you can get Louise in a bottle! And she’s delicious!

On Monday, after more clearing up and taking down, we headed back across the border to Morten and Louise’s place in the forest. Then, on Tuesday, home with so many happy memories. Thank you everyone, and thank you, GaiaGarden.