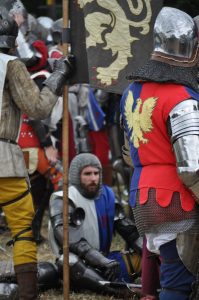 Since around 2005, the British Druid Order and friends have been holding a blessing ceremony for the Tewkesbury Medieval Festival, the largest historical re-enactment event in Europe, which takes place annually on the second weekend in July. This came about because the festival, which has been running since 1984, had always had a blessing from a Christian priest on the Sunday morning, but the organisers had become increasingly aware that a significant proportion of the re-enactors and stall-holders are not Christian, but Pagan. They therefore asked us if we would provide a ceremony on the Saturday morning before the public are admitted to the field. We’ve been doing so ever since. We began with about eight of us. This year there were more than thirty people in our circle, which isn’t bad considering most of the entertainers, stall-holders and re-enactors who would like to come are attending meetings or preparing for the day’s events at the time our ceremony is held.

In essence, we ask the spirits of the place, our ancestors and the old gods of our lands to bless and protect all those taking part in the weekend. Perhaps our greatest success so far came in 2007, the summer during which Britain was hit by unprecedented floods. Large, open-air events were being cancelled all over the country. Tewkesbury was one of the few that went ahead as planned. Yes, it was very muddy underfoot, but the rain held off for most of the weekend and the event was a success. 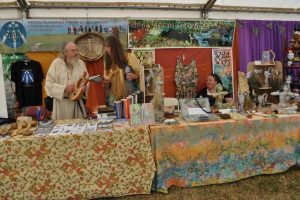 For the last five years or so, the BDO and our friends from the Wild Ways retreat centre in Shropshire, have rented adjacent stalls at Tewkesbury. We stay over for the whole weekend, arriving on Friday afternoon and leaving on Sunday evening. This means we get to enjoy the bands who play in the beer tent on those two evenings. We have also developed a tradition of drumming the sun down on Friday evening. We meet lots of old friends and make lots of new ones. It’s a joyous event and one we wouldn’t miss. 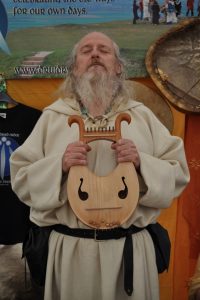 This year was a particularly good one for me. A little 8-stringed lyre (left) had arrived a couple of days before the festival weekend. For about twenty-five years, I’ve been obsessed with the Iron Age Gaulish lyres called chrotta and this little one was the nearest I’d ever come across to the best existing image of a chrotta, a stone statue dating from the 2nd century BCE, found in Brittany and called the Lyre de Paule (right). 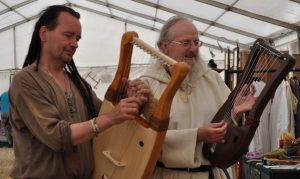 Having arrived and set up our stalls in the marquee, I was standing behind the BDO stall playing my little lyre, when, to my amazement, a guy walked through the door of the marquee carrying a much larger lyre, clearly based on the same Lyre de Paule statue that had always intrigued me. When I’d recovered from the surprise, I went over and introduced myself. The guy with the chrotta turned out to be Koth NaFiach of Dark Age Crafts, and he makes them. 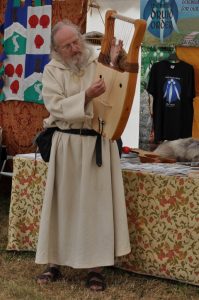 Starting out as a guitarist, he became intrigued by early European stringed instruments, then obsessed by Gaulish lyres to the extent that he had to make one for himself. Then other people starting asking if he could make them one, and so began a new career. He now tours festivals as a bard, telling stories and singing songs to the accompaniment of these beautiful instruments. As a musician, he has learned how to create them so that they not only look great, but sound wonderful. As a spirit worker, he crafts them to bring out the magical qualities of the materials so that to play them, or to hear them played, is to be transported to another world, to have the spirit truly uplifted. 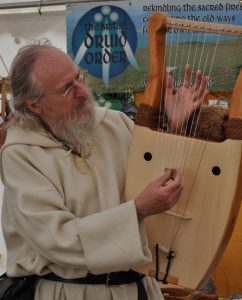 We talked a lot over the course of the weekend, mostly about our shared obsession with these almost unknown instruments. We talked about possible playing styles, how we both concluded that the Gauls probably used something similar to ancient Greek musical modes for tuning, about the paucity of images of them other than tiny ones on coins, about the relative merits of metal, gut or Nylgut strings, about tuning pegs... We also discussed what the chances were that the two people in the UK most obsessed with Gaulish lyres should be allocated stall spaces right opposite each other at an event covering about 20 acres. This is the type of one-in-a-million chance that I refer to as a cosmic coincidence, that happens when the universe wants it to.

Koth loaned us a chrotta and Ariana, Amanda and I played it pretty much all day behind our stalls. Many people asked about it and we pointed them across the way to Koth’s stall. We were happy to do the advertising in exchange for the spiritual and emotional uplift we got from playing the chrotta. We were truly enraptured. Ariana and Amanda both said they had no musical ability, but that they were able to make entrancing sounds with both my little lyre and Koth’s larger ones. With lyres, it’s all in the tuning. All the strings are in the same key, so it’s pretty much impossible to play a wrong note!

In other news, Bernie the Bolt, who’s been supplying quality cloth to the masses at Tewkesbury pretty much since it started, was having a sale this year. For the tiny sum of £30, I am now the proud owner of 10 metres of 60 inch wide, beautifully soft wool and polyester mix tartan. Why so much? Because I’m going to make myself and my son, Joe, Iron Age bardic costumes. Do we know what Iron Age bards wore? Yes, we do, because there’s this beautiful little bronze figurine of one that dates from the 1st century BCE and was found near a sacred shrine at a place called Neuvy-en-Sullias in Western France. His long tunic and trousers are clearly marked with a lozenge or diamond pattern, which is what you get if you turn a tartan through 45 degrees. Why would you do that? Because cutting cloth at such an angle wastes more material, thereby proving the wealth of the lord who provided the bard with his uniform. Other images of bards from centuries earlier and the other side of Europe confirm the universality of this style of bardic dress.

I also think I may have finally found someone who can make bags with the BDO Awen symbol embroidered on them, and can print the Fionn’s Window design on cloth so that I can make Ogham divination sets of the type described in the medieval Irish Scholar’s Primer.

Coming full circle, I picked up a bag of horn offcuts that I can use to make plectrums for lyres. If I can get the manufacturer to make a couple of changes, I’m going to import some of the little lyres I mentioned earlier and offer them for sale at events and on the BDO webshop. Amanda has already said she wants two of them! They are sweet little things and amazingly portable, made from such a light wood that the whole instrument probably weighs less than a pound. They’re a nice starter instrument to learn your way around and try out different tunings. Then, once you’ve got the hang of the lyre, you can graduate to one of Koth’s amazing chrotta reconstructions, like the one he's playing in this video from the Dark Age Crafts website.

So, maybe see you at Tewkesbury next July? I'll be the guy in the twisted tartan Iron Age bardic costume playing the wolfshead lyre 🙂 'Til then...