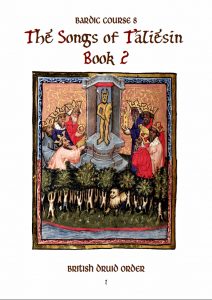 Commenting on a recent post on the BDO facebook page, someone described the Mabinogion stories and Taliesin poems included in our courses as ‘filler.’ I was somewhat taken aback by this. To me, this is equivalent to a Jew, Christian or Muslim describing the Torah, Bible or Koran as ‘filler.’ How is it that people in other traditions and cultures first learn about the gods and heroes of their ancestors? Through stories. Always through stories. And next come poems. Why poems? Because rhyme and rhythm are wonderful aids to memory.

In the British branch of Druidry, we are blessed to have a whole library of ancestral stories and poems, mostly gathered together and committed to writing in the 12th century. There has been much argument as to whether, and to what extent, this medieval literature retains enough of the pagan past to be of interest to us as modern pagans.

Brief diversion: Yes, pagans. I know a lot of modern Druidry, taking its cue from 18th century revivalists, is not pagan. I have always been a pagan Druid and the British Druid Order is openly and proudly pagan. It’s hard to argue that classical Druidry was anything but pagan, and it’s the archaic forms of the tradition that interest me more than the recent revivals. 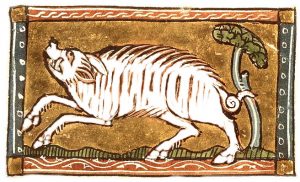 As for the tales and poems containing anything that survives from the pagan past, it seems blindingly obvious to me that they do. Take the deity from which the whole Mabinogion may well take its name, the Mabon. In the tale of Culhwch and Olwen, the Mabon must be found in order to hunt the Twrch Trwyth, a gigantic wild Boar person who is ravaging the land. Why the Mabon? Because he is recognised as the greatest of hunters, and the only one capable of handling two magical hunting hounds. Mabon means ‘Son,’ and he is the son of Modron, meaning ‘Mother.’ Roll back in time a thousand years and an altar is erected and dedicated to the god Maponus near one of the Roman forts along Hadrian’s Wall. A badly worn scene on one side of it represents Maponus as a hunter, armed with a bow and accompanied by a hunting dog, and an adjacent side shows two Deer. Maponus is the Romanised form of the native British Maponos, which evolved into modern Welsh Mabon and retains the same meaning. Five dedications to him occur in the same area, as also does a large boulder called the Mabenstane, formerly a meeting place for the local population. It is impossible to compare what we know of the native deity with the medieval tale and not conclude that Maponus and the Mabon are the same figure.

Likewise, Gwydion, the foremost enchanter and magician of the Mabinogion, is recorded in a much earlier genealogy as Guidgen, and in Roman-British inscriptions as Mercury Uiducus. Comparing the classical character of Mercury with Gwydion as portrayed in the Mabinogion, their natures are so similar that the native deity, Uidicus, can only be the same being as Gwydion. The Horse goddess of the Mabinogion, Rhiannon, was earlier Rigantona, ‘the Great Queen,’ Manawydan is the same as the Irish sea god, Manannan, and so it goes on. These are pagan gods, of this I have not the slightest doubt, and if we are pagans, surely we need to know the nature of our gods and should revel in their tales?

While editing our courses, it became increasingly clear to me that the bardic colleges of the 12th century were spurred into what amounted to a pagan revival by the same events that led them to gather together the oral literature of our ancestors and cause it to be written down. The events in question were Norman attempts to conquer Wales. This 12th century pagan revival caused the bardic colleges to adopt the extremely witchy goddess, Ceridwen, as patroness of the bardic order. 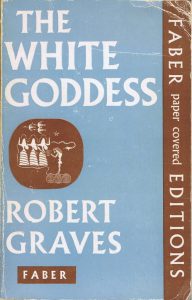 My own Druid path began in 1974, a time when there were no courses or how-to books, indeed precious little available at all from which to construct a walkable path. That first summer, I had Robert Graves’ The White Goddess, Stuart Piggott’s The Druids, Alwyn and Brinley Rees’ Celtic Heritage (borrowed from Hastings Library), and a slightly battered copy of Lady Charlotte Guest’s Victorian translation of The Mabinogion, found in a second-hand book shop. Graves is justifiably criticised for his wild flights of fancy, but his book propelled me onto this path, so I retain a great affection for it. He quotes liberally from The Mabinogion and the poems of Taliesin, hence my delight at finding that pocket Mabinogion. Unlike most modern translations, it includes the Story of Taliesin in which, on first reading, I recognised a threefold cycle of death and rebirth by which the child, Gwion Bach, ‘Little Innocent,’ is reborn as the ultimate enlightened Druid sage, Taliesin, ‘Radiant Brow.’ This story is central to our understanding of British Druidry, which is why it is the first to appear in our bardic course. 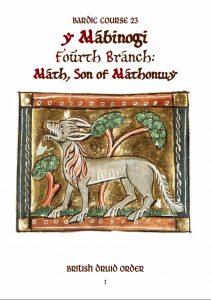 In the Fourth Branch of the Mabinogion, that of Math, Son of Mathonwy, I found a mythic cycle dealing with the birth, growth, life, death and rebirth of a young sun god, Lleu Llaw Gyffes. On subsequently joining a Wiccan coven, I used this cycle as the basis for the eight seasonal festivals we celebrated. That coven became the basis of the British Druid Order. That same cycle of myth forms the basis of the festival cycle introduced in our bardic course and greatly expanded upon in the ovate.

The whole edifice of the BDO is, therefore, built on the foundations of the Mabinogion and the poems of Taliesin, the weirder of which expand our understanding of the Story of Taliesin and his strange relationship with Ceridwen, brewer of the cauldron of inspiration. ‘Inspiration’ is the common English translation of the Welsh word, ‘Awen,’ and Awen is, as I describe it in our bardic course, the Holy Spirit of Druidry, that spirit of creativity and inspiration that flows from the tales and poems of our ancestors, through us, and, from us and our stories, poems and songs, to future generations. Awen ultimately lifts us from the mire and gives us the potential to dance with the gods. 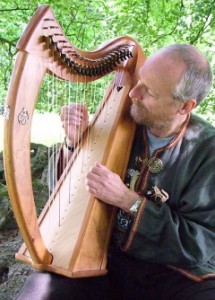 I am constantly finding new levels of meaning in this literature. One of the best known of the Taliesin poems is the Cad Goddeu, the ‘Battle of the Trees.’ I’ve known it for about 40 years, but it wasn’t until preparing a version of it to be performed with harp accompaniment in our Iron Age roundhouse that I realised the whole poem is actually about healing. It has distinct parallels with the Anglo-Saxon ‘Nine Herbs Charm.’ This realisation confirmed another I’d had while putting together the material on native healing techniques healing for our ovate course. Thus, again, these ancestral poems and songs continually work to increase my understanding of our tradition.

‘Filler,’ then, is not a term I recognise.

Having been a Druid for 44 years, it’s often puzzled and, I confess, bothered me, that so many British Druids give so little heed to this extraordinary treasure trove that has come down to us from our ancestors. In putting our courses together, then, I hoped to correct this by presenting it in a visually pleasing form that might help persuade people to read it. I know the gorgeous period font I found has proven a pain for folk who are dyslexic, but we do provide plain text versions as an alternative.

In the bardic course, we offer some indications as to why we see specific poems and stories as of particular importance. In the ovate and Druid courses, we continually refer back to them to enhance our understanding of the nature of the gods and of how our ancestors walked the Druid path, understandings I believe we need if we are to fully immerse ourselves in the path and live it as central to our lives. They are the heart of the British Druid tradition.

Having said all that, even if you skip all the medieval texts in our course material, you’ll still be left with a word count higher than that of any comparable course, so you needn’t feel you’re being short changed. And, in terms of quality rather than quantity, you have Ronald Hutton’s stated view that our bardic course is “the most intelligent and erudite sequential introduction to Druidry available.” Given that Ronald has a thorough knowledge of more Druid courses than anyone else I know, and probably anyone else alive, I’m happy to take his word for it!

I’ll leave you with a short quotation from the Taliesin poem, ‘The Cattle-fold of the Bards:’

“I am song to the last; I am clear and bright;
I am hard; I am a Druid;
I am a wright; I am well-wrought;
I am a serpent; I am reverence, that is an open receptacle.”

And if that’s not convinced you, go and read the piece I wrote some time ago on Awen, the Holy Spirit of Druidry. It’s full of quotations from the writings of our ancestors, writings we are blessed to have access to and that, to return to an analogy I used earlier, are the nearest thing British Druidry has to a Bible, in that they are a collection of ancient, sacred writings intended to provide an introduction to the pagan gods of our lands.

10 thoughts on “Medieval Literature: Why Should We Care?”