A quick look at the Events section on the British Druid Order website will show that the next month is going to be quite busy.

We are hosting the World Drum, a remarkable instrument made by Sami shaman, Birger Mikkelsen, that we last worked with in May 2008 at rituals on Dragon Hill below the Uffington White Horse and at the Avebury henge in Wiltshire. During its seven-year journey, the World Drum has been played at 500 locations on six continents. This year we are returning with the Drum to Avebury at noon on Saturday March 30th. This in the year that marks the 20th anniversary of the Gorsedd of Bards of Caer Abiri, a little idea I came up with in 1993 after being invited to create a ritual for a multi-faith conference at Avebury organised by the late Tim Sebastion, founder of the Secular Order of Druids (SOD).
After Avebury, we bring the World Drum to Glastonbury Tor on Sunday, March 31st. The weather in the UK has been bitterly cold this Spring, with many parts of the country blanketed in snow. The forecast for the weekend is for a continuation of the unseasonal chill. Given that Glastonbury Tor is one of the most exposed places in the whole of Somerset, it should be interesting.

Plans for the Glastonbury rite include connecting with the spirit of the goddess Britannia, seen here on a Roman coin. While often pressed into the service of narrow nationalism, she is actually a pagan goddess of the land. We shall also call upon the spirit of Albion, described by the bard, William Blake, as a sleeping giant awaiting the call to save our island in their time of need. He is the spirit of the people of the land. Some say he sleeps beneath Glastonbury Tor. By calling on these two deities, we hope to trigger a re-connection between land and people in the inhabitants of Britain. We shall ride this call into the earth on the beat of the World Drum and the other drummers we hope will join us. Given the cold, we may even dance, if only to keep warm 🙂

The following Wednesday, April 3rd, we bring the World Drum to Ironbridge in Shropshire. Ironbridge is the birthplace of the Industrial Revolution, a process that led to many benefits for humanity but also had its downside, a downside that includes pumping huge amounts of pollution into the water we drink, the air we breathe and the earth in which we grow our food. Since the World Drum is a call to reinstate a spiritual relationship of respect and care for our Mother Earth, Ironbridge seems like the right place to take it.
On the weekend of April 5th-7th, the World Drum will be on and around Titterstone Clee, one of the highest points in Shropshire with extraordinary views across a large part of the British Midlands. From here we shall be sending cascades of energy from the Drum and chanted awens to flow through the veins of the Earth, carrying the Drum's messages of global peace and reverence for Mother Earth.

The following weekend, April 12th-14th, we shall be at Cae Mabon in North Wales, a remarkable spiritual retreat centre. From there, we shall carry the Drum across to the ancient Druidical isle of Anglesey, specifically to the chambered tomb-shrine of Bryn Celli Ddu (the Mound of the Dark Grove). Here we shall call upon the spirits of our ancestors to aid us in spreading the Drum's message of re-awakening spiritual connections.
From there we return to Wildways in Shropshire for what promises to be an even more amazing weekend on April 19th to 21st. For one thing, we have two of the World Drum founders joining us, White Cougar, whose original vision inspired the Drum's creation, and Morten Wolf Storeide, who has overseen its travels around the world for the past seven years. They will be performing a rite for us that centres around the World Drum and chaga, a plant widely used throughout Eastern Europe and Asia for its healing properties. They are also bringing two musician friends, Lena and Will, and together they will be performing shamanic music for us as part of our Saturday might concert as The Northern Lights Shamanic Band.
During the day on Saturday we have sample sessions to launch the Druid Hedge Schools Project. This is a joint project between the British Druid Order, the Order of Bards, Ovates and Druids, and the Druid Network. For this launch weekend we have eight teachers coming from all over the country to give workshops on daily Druidry, meditation, healing and many other subjects. Further Hedge Schools sessions will be on Sunday morning. 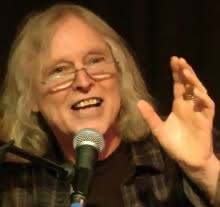 The Saturday night music session will be more than a little special. Not only do we have the above-mentioned Northern Lights Shamanic Band, we also have musical legend, Robin Williamson. Robin (left) was co-founder of the Incredible String Band in the mid-60s, formed the Merry Band in the 70s and has since pursued a solo career that has seen him collaborate with fellow folk legends such as John Renbourn, with brass bands and jazz ensembles. He's also made award-winning albums of harp music and has recorded versions of traditional Celtic tales. Many Druids regard him as the successor of Taliesin to the title, Primary Chief Bard of the Isles of Britain. And as if that weren't enough, we also have Andy Letcher performing for us. Andy is lead singer, song-writer and mandolin player (and Northumbrian piper, as our picture shows) with 'darkly crafted folk' band, Telling the Bees, whose albums have been winning critical praise and enthusiastic fans all over the country. I'll be doing a set myself, featuring songs from my own album, The Sign of the Rose, and new tracks from its long-awaited follow-up, The Lord of the Wildwood. Rounding off the evening, we'll have a set from talented guitarist, Jake Thomas.
On Sunday, after the morning's Hedge Schools sessions, there will be a buffet lunch accompanied by more live music and a bring-and-buy market. Then, in the afternoon, we have our farewell ceremony with the World Drum before we send it on its way with our blessings to its next destination.
After all that activity and travelling, it'll be good to get home again and take a rest. Well, get back to finalising our ovate course anyway.
During these rites, I hope that my youngest son, Mike, currently studying documentary video production at Bournemouth University, will be filming. Results will be posted here and elsewhere. Eventually I hope that Mike will put together a documentary on modern Druidry. It would be great to have a documentary about Druids made by Druids. We'll keep you posted on that too.
Meanwhile, I hope we'll see you at some of these events over the next month or so. The World Drum is a wake-up call to bring ourselves back into good relationship with the spirits of our lands and the peoples of all nations. The beat of the Drum is the heartbeat of Mother Earth. May the sound of her heartbeat reach all peoples, wherever they may be.
Many blessings,
Greywolf /|\