The question of whether or not to robe for ceremonies is one that often arises amongst newcomers to Druidry, usually accompanied by questions as to what type of robes are appropriate. As with so much else, the answers to these questions vary widely between different Druid groups. The Welsh Gorsedd (founded in 1792) led the way among Druid revivalists with regard to robes and remain one of the few groups to insist on the wearing of robes during public ceremonies (see the video). Their founder, the itinerant stonemason, folklorist and poet, Edward Williams, better known by his bardic name, Iolo Morganwg, assigned different colours to the three grades of his bardic order as follows:

“The Bard wore a sky blue robe, to signify peace; the Druid wore white, denoting holiness; and the Ovate green, which was an emblem of progress.”
(Barddas, vol. 1, page lvii; vol. 2, pages 24-29)

The Ancient Druid Order (founded circa 1907) followed the Welsh Gorsedd in assigning the same colours to its three grades, and its offshoot, the Order of Bards, Ovates & Druids (founded 1964), continued the tradition, both from its original foundation and its later reformation under the leadership of Philip and Stephanie Carr-Gomm. Early OBOD course material recommended a basic robe of white with tabards of blue for a bard, green for an ovate, worn over it.

So far, so good, except that Iolo, for all his many excellent qualities, was a highly imaginative laudanum addict and a prolific forger of the supposedly ancient documents in which he claimed to have found his entire system of Druidry set out. The colours he assigned to the various grades had little basis beyond his fertile imagination. 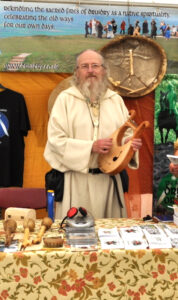 When dreaming the British Druid Order into being in the 1970s, I looked to what classical Greek and Roman writers had written about Druids 2,000 years ago. The most famous ancient description of a Druid ceremony is undoubtedly that of Pliny the Elder, in his Natural History (1st century CE). He writes that, “A priest arrayed in white vestments climbs the [Oak] tree and, with a golden sickle, cuts down the mistletoe.” It struck me that if a priest is going to clamber into the branches of an Oak tree to cut mistletoe from it, the chances are he would be young and agile rather than a wizened sage, a youthful bard rather than an aged Druid. White having traditionally been connected with purity and innocence also suggested youth. So I settled on a white robe as the BDO’s bardic costume.

I then found a translation of a poem by the 1st century CE writer, Strabo, in which he refers to Druids wearing red robes trimmed with gold. I’ve since been unable to track down the quote, but it was enough to suggest adopting a long red, sleeveless tunic as our ovate vestment. Red, being the colour of blood, is associated with the cycles of life, including the menstrual cycle with its lunar associations, and the ovate path is the path of natural philosophy, learning from life. 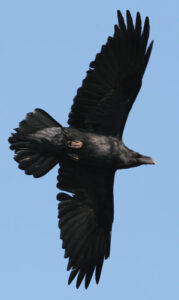 My third classical source was the Roman historian, Tacitus, whose account of Roman legions attacking the Druid isle of Anglesey in 61 CE (Annals XIV, 29-30) tells us that “Along the shore stood the enemy in a close-packed array of armed men interspersed with women dressed like Furies in funeral black, with streaming hair and brandishing torches.” It has long been conjectured that these women were Druid devotees of a native Raven or Crow goddess. If so, it is possible that their black dress took the form of cloaks that would flap like dark wings. Add traditional European associations of black with old age and death and a black cloak seemed suitable garb for a BDO Druid. The fact that this white, red and black colour scheme has associations with the modern Pagan concept of a triple goddess as Maiden (white), Mother (red) and Crone (black) was an added bonus.

Prior to the arrival of my first Wolf-skin cloak in 1994 then, my accustomed gear for public ceremonies was an unbleached woollen robe, a long, red velvet tunic with gold satin lining and a hooded black woollen cloak.

Subsequent research added further possibilities. The archaeology of Iron Age Europe reveals the popularity of tartan-like woven cloth and images of bards show them wearing long, tight-sleeved tunics and trousers made from cloth with a diagonal, tartan-like weave (right). Enough of these exist to suggest that this combination of tunic and trousers was the standard clothing of bards from around 900 BCE through to at least the 1st century CE. Classical sources refer to the bardocucullus, a short woollen travelling cloak with a hood whose name suggests it was favoured by bards as they travelled around the country. 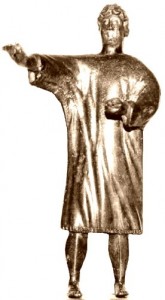 A bronze figurine from Western France (right) is our most likely representation of a late Iron Age Druid in ceremonial dress. He sports a neatly trimmed beard and wears a loose-fitting, knee-length robe with wide sleeves that appears to be plain apart from a decorated edging around the lower hem.

A number of crowns have been found in the British Isles, formed from a circlet of sheet bronze over which rises a crossed arch made from two strips of the same metal (below). It has been speculated that these were part of the ceremonial regalia of Druids. This make sense to me as 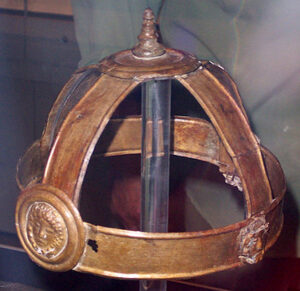 there is evidence for a native belief that a place on the crown of the head allows the ‘breath of life’ to pass in and out of the body, making it peculiarly vulnerable to attack.

Medieval Irish sources suggest that social status was indicated by, among other things, the number of colours one wore. Given the high social status of bards and Druids, one might, therefore, expect some spectacularly multi-hued garments.

There are, then, a range of possibilities for Druid robes and regalia that have at least some basis in history, whether from the early Bronze Age or the Druid revivals that began in the 18th century.

Many Druids, however, probably the majority, don't wear robes at all, preferring everyday clothing, albeit often augmented by decoration or jewellery suggestive of their spirituality.

Few Druid groups insist on robes, even for formal public ceremonies. The only two I can think of are the Welsh Gorsedd and the Ancient Druid Order. OBOD recommend robes for public ceremonies but don’t, as far as I’m aware, insist on them. In the BDO, we pretty much wear whatever seems best and are happy for others to do the same. 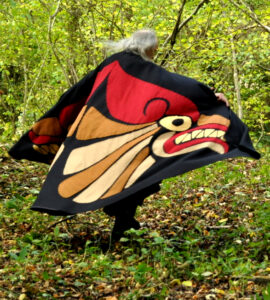 Over the years, we have increasingly adopted clothing that speaks of our personal spiritual paths. So I often wear a dark green linen tunic bearing tokens of my alignment with Wolf spirit. I have a second Wolf-skin cloak that came to me at a time of particular need a decade after the first and wear this when it feels right. I have a dance cloak (left) bearing images of Wolves drawn from a medieval manuscript.

For the first open, multi-faith Gorsedd ceremony in Volunteer Park in Seattle, my friend, Leon Reed, sent out a message asking potential participants to, as he put it, “wear your power,” that is to don whatever ritual gear best expressed their spiritual path and made them feel most strongly connected with it. This struck me as a brilliantly inspiring phrase. I’ve since adopted it as my own policy, wearing whatever seems right for the ceremony or other event I’m taking part in. I’m very happy for others to do the same, and they usually do. This means that BDO ceremonies tend to be quite colourful affairs.

Having long believed that ancient Druids were the North-west European equivalent to shamans in other cultures, some BDO ceremonies call for a “wearing of power” that can take on a decidedly ‘shamanistic’ look, with the wearing of animal tokens, costumes or actual hides, face and body painting and other adornments (below). 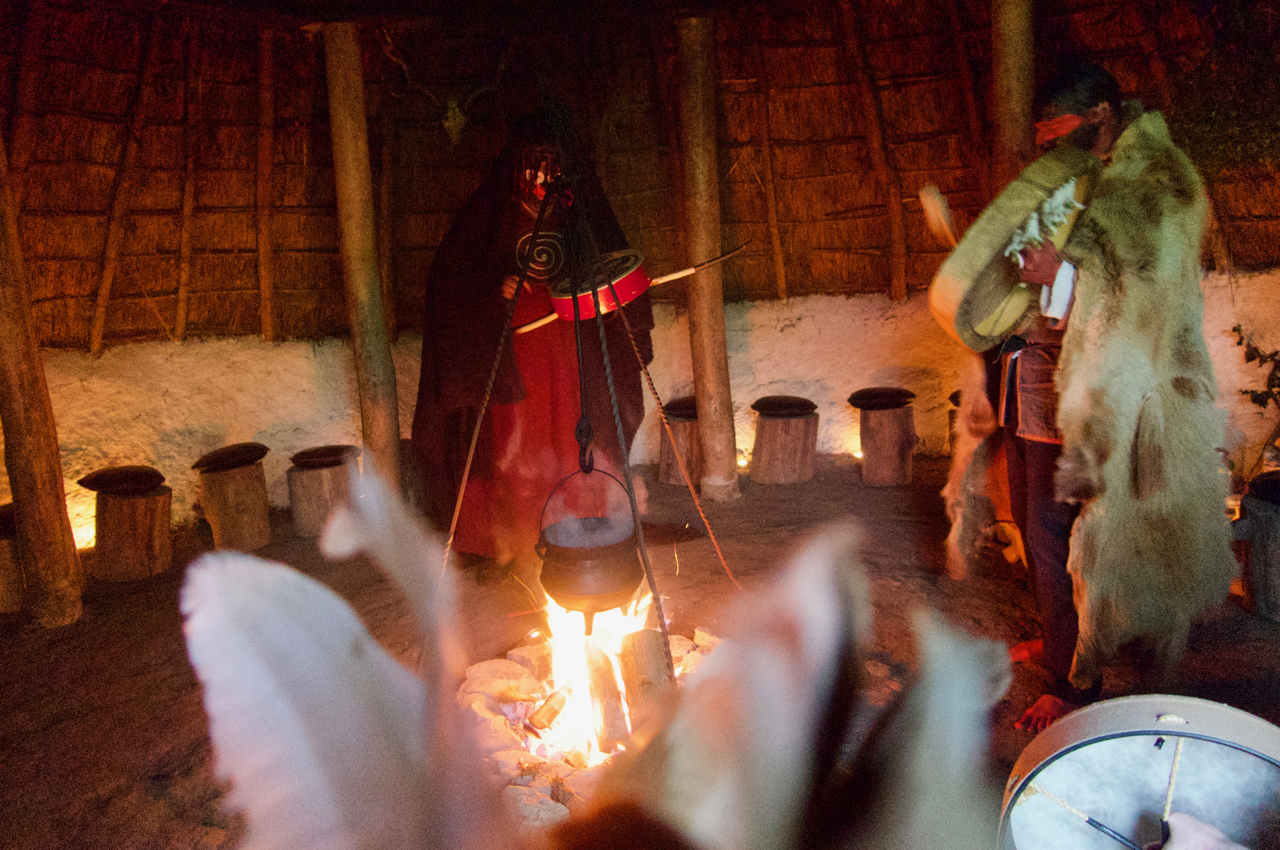 What you choose to wear as a bard, ovate or Druid, then, depends on many things. One is which group or order you belong to and what their policy is. Another is which, if any, historical inspirations you draw on, from prehistoric archaeology to 21st century Druid courses. Another is what works for you personally, spiritually, psychologically and aesthetically. As said, some Druids eschew robes altogether, preferring plain street clothes. Others, myself included, kinda like dressing up, although it is, for us, always dressing up with a purpose. Donning special items of clothing for particular types of ceremony enhances the specialness of the occasion, focuses us on what needs to be done, and physically reminds us of our spiritual connections, thereby strengthening and enhancing them.

Leon’s expression still sums it up best though: “wear your power!”